Former Houston City Councilman and poll watcher Andrew C. Burks, a lifelong Democrat, came forward to private investigators to express his belief that the long-running Democrat voter fraud operation in Harris County, Texas is still in operation in the 2020 election. 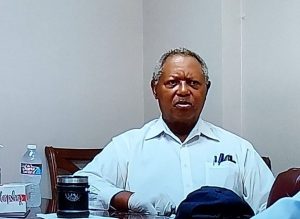 Burks explains based on his experience that electronic voting machines sometimes still have the ballots in them, meaning ballots were not counted. He explains how he has received evidence of dead people voting in Harris County, the National File reported.

One Biden campaign staffer was fired after he was implicated in an illegal ballot harvesting operation.

Vote count discrepancies are already being reported in Harris County.

The FBI is investigating, for whatever the good that will do. I mean, they’re so busy investigating a Trump caravan following the Biden-Harris bus, and all.

According to the National File, twenty private investigators have uncovered a great deal. What has been uncovered is a group of masterminds wanting to destroy the Texas voting voice. Some of the masterminds include Democrat County Commissioner Rodney Ellis and Democrat State Senator Boris Miles. They have two captains, Gerald Womack and Dallas Jones.

If Texas turns blue, it will be wheeling and dealing like this.

They harvest ballots by mail from nursing homes, homeless centers, door to door in poor neighborhoods, often dressed as Census workers.  Also, they offer $50 gift cards in front of stores asking people to take ballots by mail, acquired from the above, to sign and mail at a local post office. They hold ballots by mail in several locations where people forge signatures on the collected ballots by mail.

Evidence has been presented to the local DA, Kim Ogg, who received a substantial amount of political contributions from Soros funded organizations in her election in 2018.

They mailed ballots to the elderly without requests in violation of Texas law.

In the meantime, the Democrats are implementing their massive election voter fraud scheme, mostly in open sight. One arrest would go miles in stopping this election fraud scheme. The drive-through locations are located primarily in Democrat areas. This also violates the 14th Amendment.”

Andrew Burks explains how he PERSONALLY was given info proving dead people’s names are used to vote.