The Legal Process of US Presidential Election

Thought I would put in writing what people are missing in the media. The Fourth Estate (yes, that is what the media is called supposedly to balance the other 3 branches of government) has totally been missing the point when they say the Trump lawyers keep losing in the lower courts. That is what they want to do, and rapidly. Why? Because then it gets moved UP to the higher courts, then to the State Supreme Courts, the Federal District Courts and FINALLY to the Supreme Court.

There is  some chance at the State Supreme Court level or Federal District Court level that the evidence is enough to disallow certain votes (i.e. mail in ballots) which may be enough to overturn one or two State results.  Barring that, you now go to the Supreme Court. There, a whole bevy of issues: mail in ballots, barring Republican canvassers, mass dumps of ballots after the cutoff dates, software manipulations of the Dominion machines, etc., etc., etc., will be heard. If even a small of amount of these claims can be proven, and that is a heavy lift, the election can be voided by the Court and sent to the legislature. Not, that one only has to prove there is malfeasance in the election. Notice the DEMs cannot offer a challenge and disprove it, so in the Supreme Court is really is just a one-sided case. Proof trumps everything. 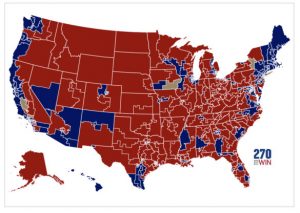 A Presidential candidate must receive an absolute majority of state delegation votes (currently 26 votes) to become the president-elect. The House continues balloting until it elects a president. As a consequence of the state delegation voting method, the party that holds the majority in the House could still lose the contingent election if the minority party holds the majority of state delegations.[5] The District of Columbia, which is not a state, does not receive a vote. At this time the Republicans how a majority in 29 delegations, so the vote could be 29-21 for Trump. The incoming House would vote next year.

As example, let’s use Georgia. Georgia has a Republican majority in the House, that means the House will most likely cast a vote for the Republican candidate.. one vote per State… it is NOT done on the State level. So, in Georgia’s case, there are 14 Representatives with 10 being Republican and 4 Democrat coming in the next session (which will decide the President). They chose to vote amongst the top 3 Presidential candidates and the winner gets the vote in the House. Note, California with 53 Reps, gets only 1 vote, presumably for Biden. So, in 29 States there are more Republican Reps than Dem, even though the Total House has 5 more Democrats that Republicans… the founders again were geniuses. Get to the Supreme Court, get to the House, Trump gets a second term.. and a LOT of people go to jail (hopefully).  In the Senate, the Vice President gets voted on.. one vote per Senator with the sitting VP casting the tying vote.