The Cost of Election Fraud

While most people would reply to the question, “What is the cost of election fraud?” with a retort such as: “The lost of our republic,” “No faith in our elected leaders,” and “A move to a global cabal,” I was looking a little bit closer to home, in that what would it have cost to have actually stolen the 2020 Presidential Election in dollars and people. So, that is what I did.

Some time ago (right after the election), I was thinking about how many people would be needed to pull of the election fraud in the 5 large municipalities / counties that we are now all familiar with: Maricopa, AZ, Fulton, GA, Wayne, MI, Philadelphia, PA, and Milwaukee, WI. You know, you always have to follow the money, and someone was hiring people to do these things. I was also perfect because, well, no one was working so, sure some extra cash, no problem.

So shortly after the election was over and we saw these massive ballot drops and vote swings, I started to estimate how many people you would need to pull of this massive fraud. Based on estimates using my background of running manufacturing operations some time ago, I came up with a figure of needing 3,000 individuals and paying out (payouts are multiple levels, because of course you had to pay off the politicians and officials too) of $198 million in my first calculation. I am certain grifters like Stacey Abrams also has a spreadsheet very similar to this one below. I am sure the numbers mind be slightly off, but you get the idea. 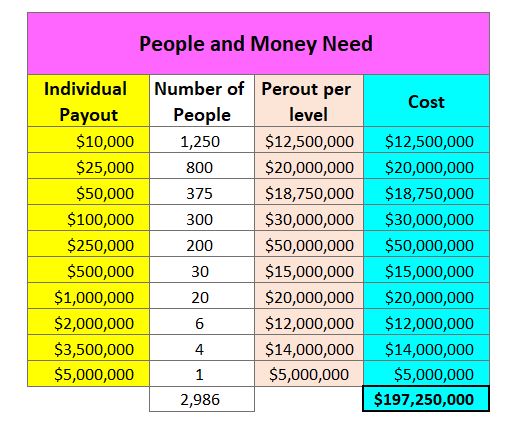 In looking at the numbers above you have to think in terms of military organizations. On the top are Generals, Colonels and Majors and those that do the dirty work, Privates, Corporals and Sergeants. In between you have those who manage the grunts: Staff Sergeants, Sergeant Majors; and then those who manage the Sergeants: Lieutenants and Captains. Remember, you just needed 7 locations with this form of command and control to implement a fraud of this magnitude. 400+ individuals is more than enough to have accomplished this per location.

Then we come to find out that Mark Zuckerberg poured in $300 million into these five contested municipalities. So, taking my original calculations, and then doing a little reverse engineering, we come up with new estimates. With $300 million, you can now gainfully employ 4,088 to pull of this massive heist as illustrated below. Not saying that this did happen, but man, it seems really coincidental that all these individuals help make it happen. I remember seeing a video of a mob guy in Philadelphia saying he was paid $3 million to produce 300,000 ballots. The video of Skinny Joey Merlino telling someone that what he did and would testify if offered immunity and a new identity has been taken down, but here is the information link. 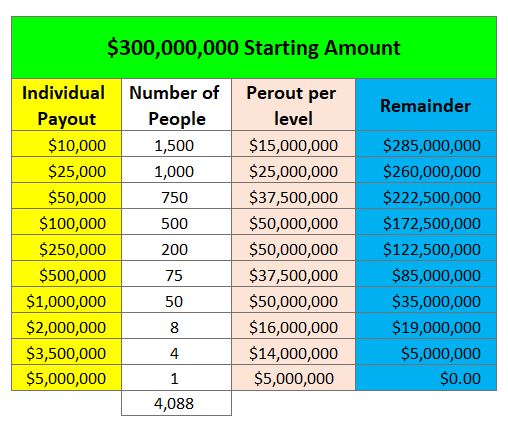 See, it is ALWAYS about the money and following it. We have already seen in Georgia how Ms. Abrams, through her company, was able to grift the Georgia governor. Why? Because the both new the previous election for Governor was tainted? Maybe. I am certain if you look at the majority of people pushing back against these audits, they definitely have their hands in the money jar and they are not clean. Just another data point of interest: look for the money. Where did $300 million go, and to whom?